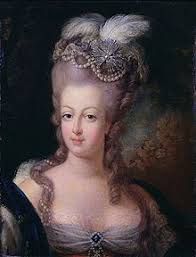 Inoculations have not always been popular, and we see that today with many individuals, interest groups, and protestors pointing an accusing finger at inoculations being the cause of the accelerated number of children with autism.  This skepticism of inoculations dates way, way back, but Marie Antoinette may have been the first person to launch a public relations campaign or rather a public service announcement to rally disbelieving people to take inoculations for Small Pox or what was also known as the Red Death and Speckled Monster, and she did this all using her hair.

You could say her platform in support of inoculations is comparable to First Ladies picking a social cause to support and popularize like Michelle Obama and her mission to promote healthy food habits and exercise; Nancy Reagan and her "Just Say No" campaign to eradicate drug use; Hillary Clinton and her fight to bring awareness to problems with the American healthcare system; Lady Bird Johnson and her quest to clean-up and beautify neighborhoods and parks; Dolly Madison and the community support she provided to orphanage asylums; and the list goes back and back to even the First Ladies before Dolly, but we can go even further back to around 1774/1775 with Marie Antoinette giving one of the first examples of political wives choosing a platform to raise public awareness to some social issue or problem.

Marie Antoinette married the Dauphin of France and became the Dauphine in 1770 when she was practically a tween and later became the Queen in 1774 until 1792 with the storming of the Bastille and the French Revolution.  Although some say she was the reason for the revolution and have called her frivolous and frilly, I am a member of the opposing camp and believe her to have been unfairly stigmatized during a time of social and cultural tumult when the opposition to the deep division between the rich and poor needed a specific enemy to identify, and she just so happened to be the perfect one with her history of extravagances particularly clothes and jewelery, which, in truth, was just a folly of her youth and naivety and a mistake she made early on in her queendom that she came to regret well before the threat of the guillotine.  Well before the quillotine and murmurs of a revolution, she traded her expensive, custom-made dresses for muslin, cotton frocks, and wore little jewelry to festoon these dresses.  There's Marie above in muslin and more organic fabrics compared to the wardrobe she wore when she was younger.


Her PSA for the smallpox vaccine is a poignant moment showing her entrance into adulthood and her attunement to social issues that needed to be addressed.  Having no way to vocalize her opinions publicly, she chose to use her hair as her mouthpiece.  Marie Antoinette was a fashion icon from the time she stepped onto French soil with her exaggerated wide panniers.  Panniers are those constructions worn under dresses that make the hips look wide.  Aware of the attention given to her fashion, she decided to decorate her hair pouf with symbols celebrating the cure for the spread of Small Pox and her husband agreeing, after her force, to take the vaccine.  The poufs, which Marie popularized, were those impossibly high, powdered, beehive hair-dos women proudly styled at the time.  Her famous Small Pox pouf or pouf à l’inoculation was, of course, over-the-top, and she ornamented it with a rising sun representing enlightenment and a serpent in an olive tree representing medicine and healing.  Her hope was that upon seeing her parading her hair as a symbol of her support of the vaccination others would get vaccinated too.

The issue hit home to Marie as she was infected with the disease at the age of two and narrowly escaped death. One of her sisters and one of her sisters-in-law were not as lucky though and died shortly after contracting the disease.  One other sister was badly scarred as a result of the disease and was deemed ineligible for marriage as she was very unlikely to attract suitors.  Worried that the disease would take her husband and worried that it would take more than the 400,000 - 500,000 lives it took yearly, she decided to use her hair as a PSA to promote the vaccine.  Unfortunately, I couldn't find an etching or a portrait of her pouf à l’inoculation.

*My resource was Queen of Fashion: What Marie Antoinette Wore To The Revolution by Caroline Weber.  This is one of my favorite books.